RequireJS is great, and if you are using or planning on using RequireJS for managing JavaScript then you’ll really notice the benefits.

However one of the trickier parts of RequireJS greatness is finding a way to organise JavaScript modules across multiple pages and on a more granular level, multiple HTML modules on those pages.

This post won’t be an intro to what AMD modules are, or even a RequireJS tutorial, as a basic understanding of AMD and RequireJS is assumed but I will break some of the concepts down where necessary.

One of the questions I had early on was:

How do I organise my code across multiple pages?

This question does seem to be a popular one and I think one of the reasons is due to many RequireJS tutorials showing everything being initialised inside the main.js file and that’s it. Whilst this works great for single page applications, it doesn’t help the rest of us with larger, multi-page based sites.

So what can we hope to achieve? Well, ideally our solution should:

The trend these days is to write modular HTML components. And with good reason.

Removing the tightly coupled nature of HTML and its corresponding CSS can allow developers to easily update, replace or move modules on a page. This is something we’ve previously found difficult with a more page based approach.

We can see it promoted by things like OOCSS, SMACSS, BEM and even Bootstrap.

If an HTML module is a self contained unit on the page, then it can be quite common for these modules to require scripts to control their behaviour. A carousel module is a prime example. If the need to move the carousel arose, then ideally we should be able to do so without re-writing CSS and adjusting where scripts are included.

So we’re taking the idea of page specific JS modules a little further and instead using HTML module specific JS.

Kicking things off with main.js

A lot of RequireJS examples and tutorials will talk about using a main.js file to kick off the loading and initialisation of your scripts. We’ll be making use of main.js to load just the core modules and libraries for all pages of our site

It’s not unusual to start with something like this in the page head:

Once the RequireJS library has loaded it will look for the data-main attribute and attempt to load it asynchronously. In this case, our main.js file.

In almost all cases RequireJS will need some configuration options, so it makes sense that the first line of main.js is a call to require.config(). The API documentation has a wonderfully comprehensive overview of all the options, so I won’t delve into it here. Let’s instead continue with a basic example:

So what are we doing here?

First we’re setting a baseUrl to the scripts folder, then letting RequireJS know where our libraries are with the paths option (compulsory when using jQuery as it is a named module) and then shimming any scripts that do not have AMD support. This is common with most jQuery plugins.

Just beneath the require.config() is where all our core libraries are required, and also any modules that you might want to load and initialise on every page. Keeping it simple again:

Seeing as we’re just loading these libraries (our modules will actually use them) we can leave the callback empty.

However, you might find that some modules do need to initialise here as they are used on every page (a navigation dropdown for example) and in that case I suggest using define, purely to take advantage of the sugar syntax.

This is functionally the same as the following:

I prefer the sugar syntax when requiring multiple modules and interacting with them. It makes for a nicer read and also doesn’t rely on exact argument order in the callback. However, it’s totally up to you.

One common pattern is to move the define call into an app.js that will return a module with an init function, and then have main.js require that file and instantiate it.

So, where are we at the moment?

We have jQuery and Handlebars required in our main.js file and the file structure looks a little like this: 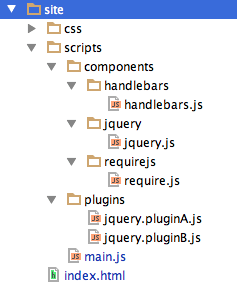 And if we load the page our two core or main modules should be fetched.

If this were a real carousel and all the HTML and CSS were in place, then it would also need some JS. We’ll create a Carousel.js module now, and place it in a directory such as scripts/modules.

The modules folder will be where our AMD modules will be stored. So think of this as the directory that stores all the JS modules for your site.

To spice things up we’ll also make an assumption that this carousel relies on two other jQuery plugins to function. These will be found in scripts/plugins. You may have noticed I referenced these in the shim configuration earlier.

We’ll use the plugins directory for (you guessed it) any plugins and other third party code that we need, but haven’t authored ourselves.

If you’re getting a bit lost with all the files and modules that are being referenced then have a look at this repository with the examples used in this post.

Inside our Carousel.js file we have a sort of pseudo module for example’s sake. It will accept a reference to a jQuery object and set some text on it, just so we can see the module loading in the page. You can use your imagination here as to how this might work with a more fully-fledged carousel module:

You can see that I’m using the sugar syntax that was mentioned earlier and then simply requiring jQuery, some plugins, and then returning a Carousel object as the definition of the module.

Using require we can request and initialise our Carousel module:

In the above example we are passing a jQuery object into the Carousel constructor. To ensure that the $ is available for use, jQuery is required as a dependency here as well.

But didn’t it just get declared as a dependency by Carousel?

Yes it did, and it most cases it will probably work because jQuery still registers itself globally even when used as an AMD module.

However this is not normal behaviour, and it’s worth remembering that modules execute in order, but are loaded as soon as possible, so it’s a good practice to always explicitly declare dependencies every time you need them and not rely on things loading by chance.

Additionally, a module will only load once so there is no harm in multiple require calls to it.

Now if we simply place that code in a script element beneath the carousel HTML module, you might expect everything to work

But we actually get a console error:

If you remember from earlier, we told RequireJS where to find our version of jQuery by using the paths configuration option. In this case RequireJS has attempted to load jQuery and our Carousel module before the main.js file has loaded. This means that the config options have not been read yet and therefore an error is shown.

Waiting for main.js to be ready

They way to solve this is to ensure that main is loaded and ready before requesting the Carousel module. We can achieve this by simply wrapping the modules’ require call in another require:

Now any of the modules relied on in main.js will already be loaded and ready for use.

Preparing for the build tool

Although dropping the above code beneath the module has worked, having it between two script tags makes it impossible for the r.js build tool to assist later on. To work around this, the code that requires the modules also needs to go into a JS file.

I usually create a directory called page to serve this purpose, but really the name can be anything as long as your AMD modules are separate.

Now the directory structure is looking a little like this: 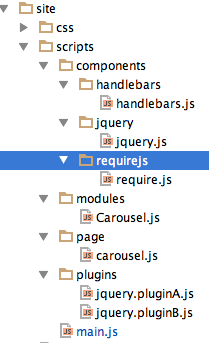 By dropping the code into carousel.js (lowercase to signify the difference) the HTML page can simply require that file:

The HTML module is a lot cleaner without the JS code littered amongst it, and now the build tool can be brought in to help.

The goal of the build tool is to work out the dependency chains and then compile the modules into one (or more) files that can then be served to production.

The simplest way is to install it as a global module via npm:

Before going any further I must point out example.build.js over in the r.js repo. It’s a heavily commented example file that makes it very clear what all the build options do. I tend to only use a handful.

The build file I used with this example can be found in the GitHub repo, but I’ll go over two of the important options.

The build tool is smart enough to be able to reuse your configuration options. By ensuring that require.config() is the first thing in main.js, we can simply point the build tool there and avoid having to retype all the paths and shim options.

If specified with the path to your main JS file, the first requirejs({}), requirejs.config({}), require({}), or require.config({})found in that file will be parsed out and used as part of the configuration options passed to the optimizer – Source

One of the slight pains of the whole process is manually configuring the modules on the site, however, this step is crucial for creating a correctly built output.

Each entry in the modules array will mean r.js will attempt to create that module with all its dependencies included. Using the include and exclude properties will allow you to ensure modules aren’t accidentally included twice or left out completely.

By setting the findNestedDependencies property to true it means that r.js will pick up the require calls within the require(['main']) call. If this property wasn’t used then the module would need to be explicitly declared with include.

Upon completion, r.js will output a summary of what files were built and what modules were included. This is a great way to ensure you haven’t missed anything, or duplicated a module.

I find it useful to set up a build script early on in the process and run it occasionally to ensure everything is being included correctly:

One thing to mention is that by breaking things up into modules of code (carousel.js, nav.js etc) there are going to be more HTTP requests made than if it was all in one file.

Even though these modules are optimised they still exist as separate JS files, albeit far fewer than if you hadn’t run the build tool at all.

Personally I think this minor performance hit is worth taking, considering what it pays back in ease of maintenance. The JS files are still loaded asynchronously, so there should be minimal impact of page rendering speed.

Depending on what config options you used, you might end up with a copy of the site directory with all the built scripts included, or you might have just built the scripts directory on its own.

Deploying the site with the built scripts is often decided by platform choice and other environment restrictions, but I use Grunt JS to handle the building of the modules and copying of script directories etc.

I hope that sheds some light on some of the benefits RequireJS brings, and how to use it.