Originally it took me a while to get on board with using Bower as part of my main development workflow. My biggest gripe was the way it handled repositories that were missing a bower.json file to configure ignored files etc.

In that scenario the whole repository is installed into the bower_components folder and although there are two sides to it, checking that fluff into my Git repository doesn't feel right. That is of course, until Grunt came along.

Grunt to the rescue

By selectively copying files this way our repository can be kept free from test folders, READMEs and other cruft.

If you then needed to update jQuery to the latest version all it would require is changing the version number in the bower.json (or by installing it on the CLI), running the Grunt task and then committing the updated files to the repository. No manual downloads or file copying required.

It's hard not to have heard of Bower by now, so for brevity I'll drop a quote from their documentation:

Bower is a package manager for the web. It offers a generic, unopinionated solution to the problem of front-end package management. Bower runs over Git, and is package-agnostic. A packaged component can be made up of any type of asset, and use any type of transport

If you're unfamiliar then there is a nice post on the Treehouse blog that covers the basics.

The best place to start is by creating a fresh bower.json file. This will keep track of the dependencies that your project requires and also their versions.

If you've used NPM and package.json then this will be familiar. You can do this manually or by running bower init on the command line, and walk through it in stages.

I prefer to create a scripts/vendor directory and move dependencies from the bower_components directory to there. To demonstrate this I've created an example directory with three installed dependencies - React, Angular and jQuery.

Bringing in the Grunt

There are two ways to use Grunt in this situation. The easiest is to use one of the many Bower plugins found in the Grunt plugins directory. These will typically handle the Bower install/update for you and then copy the files across to a directory of your choosing.

The second is to use a task just to do the Bower install and then use grunt-contrib-concat. This not only allows you to move files to the vendor directory as before but also makes it easy to move multiple files into one.

Why bother with concat?

A good example of this being useful is when a library is broken up into multiple files and you'd only like to use the ones you need. jQuery UI brings down each part of the UI library as a separate file, so by using the concat task you can create your own custom build and move just one file across to the vendor directory to be checked into your repository.

I tend to find the second option most effective, but let's look at both.

When I have just some simple Bower packages to copy over I reach for grunt-bowercopy. It has a very simple configuration and will also ensure that bower install is run before moving any files.

The srcPrefix and destPrefix options are a nice touch and keep the file paths simple. When grunt bowercopy is run it will create the specified files inside the vendor folder. 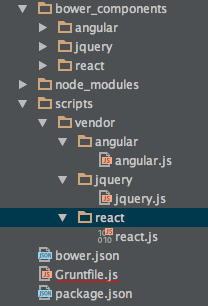 If nothing more is required then great, you're pretty much done here. The only place I could see a shortcoming with this task was not tapping into some of the more advanced file path matching that is usually allowed with the files object in Grunt. Matching *.js is a good example.

It's worth noting at this point that although I've picked JavaScript packages in my examples you can just as easily use Bower to install Bootstrap, Normalize or SuitCSS and copy across CSS files as well.

Using the concat task is pretty simple, but the first thing to do is be able to install any updated packages. Fortunately there is an abundance of Grunt tasks already available for this and the one I opted it for is grunt-bower-install-simple. By default it requires no configuration and will just run a bower install for you.

Then configure the concat task:

I like the idea of breaking up each library into a sub-task. It seems unnecessary at this point but if Angular or jQuery plugins are added at a later point it makes it easier to maintain. Choice is yours.

Finally tie them together with registerTask:

Now that the concat task is being used you could compose your own jQuery UI build:

Or in the case of SuitCSS it installs each component into a folder prefixed with suit, so suit-utils-display, suit-grid etc. These can be gathered up into a single CSS file with the concat task:

It takes a bit of configuration but for a large site/app it pays to make dependency management as easy as possible. I've reaped the benefits on work projects as well as personal ones.

Try it out and if you find ways to make it more efficient then by all means let me know.